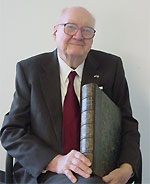 John Horton's relationship with Cleveland State University began when he enrolled as a student in 1981, following a career at Cleveland-Cliffs. Looking for a venue to support his lifelong interest in French-American history, maritime history, and the industrial development of the Great Lakes region and metropolitan Cleveland, Mr. Horton found the University Library to be his preferred partner.

In the early 1990s, he initiated the French-American fund, which has grown to $63,000 through generous contributions from Mr. Horton and his corporate and personal friends. Through the fund, the Library collects materials in the areas of French American/Great Lakes industrial history. In 1998, Mr. Horton worked with the Library and the Comte de Chambrun, a descendant of the Marquis de Lafayette, to obtain a microfilm copy of the rare Lafayette collection for the Library.

In 2003, Mr. Horton made yet another significant contribution to the University Library, its two millionth resource, Cleveland Illustrated. This book was added to the Library's Special Collections, and the photographs have been digitized and made available online at Cleveland Memory. The addition of Cleveland Illustrated and the digitization project exemplify John Horton's and the LIbrary's commitment to making local history accessible to the University and Cleveland communities.

John Horton died on February 15, 2006 at the age of 91. His generous support for the University Library will never be forgotten, and he will be greatly missed.