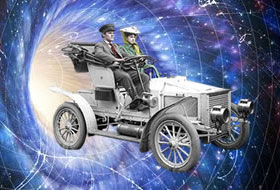 Below is a list of events in Cleveland history that appear in the Cleveland Memory Time Machine section on the CMP homepage.